Intro to Greece in WW2

Has the role of the Greece in WW2 been unjustly overlooked and disregarded? The Greek mainland was occupied by the axis armies on April 30th 1941 after the “Battle of Greece” was lost by the resistance and allied forces. This resulted in the evacuation of the Commonwealth Expeditionary Forces who fled to Egypt and the government seeking refuge and being hosted in London by the allies. The total conquest of Greece was completed after the Battle of Crete between 20 May – 1 June, 1941. On the face of it, the defence and resistance of Greece was ultimately unsuccessful and maybe this is why the part Greece played in the war has often been overlooked. Greece was actually a real thorn in the Nazi paw, causing the Nazi hierarchy many headaches and putting up a very strong, effective and in some respects, successful resistance.

The Greco-Italian War, 28 Oct 1940 to 23 April 1941, saw the commencement of the Balkans campaign and would later develop into the Battle of Greece once British and German ground forces had to intervene in April 1941. The Italian army’s invasion of Greece through annexed Albania started disastrously – a sign of things to come. Everything from poor equipment to even poorer leadership was going against the Italian campaign. However, Greece started preparations before this in the late 1930s including the Metaxas Line, a chain of fortifications constructed along the Greco-Bulgarian border and in 1939 they accelerated defences in Albania due to fears of an Italian attack from Albania – which is exactly what happened. On 28th October Mussolini gave the Greeks an ultimatum –  Allow Axis forces to enter Greek territory and occupy certain unspecified “strategic locations” or face war. The Prime minister for Greece, Metaxas, allegedly replied with a single word: “όχ!” (No!). However, his actual reply was “Alors, c’est la guerre!” (Then it is war!)[1]. The Greeks still celebrate the 28th October as ‘Oxi day’ – a public holiday to commemorate the day their country stood up to fascist axis nations. 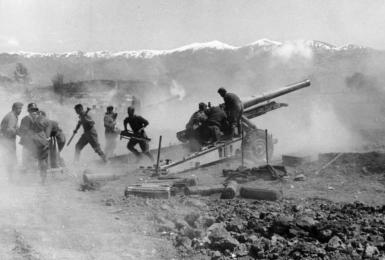 German artillery fires during the advance through Greece in WW2, 1941.

Disaster for Mussolini at the hands of Greece

So, war it was. The Italians invaded Greece in WW2 on the very same day the ultimatum was issued – before the offer had even expired. As mentioned above, the Italians were hindered by sub-par equipment and leadership and the tricky mountainous terrain that is the Algerian-Greco border made things doubly difficult. Italy, allied with Bulgaria, dwarfed the Greek army in manpower and materials and as a result the Greeks had to adopt a purely defensive strategy, retreating tactically in order to gain time until they could fully mobilise their army. The Italian invasion of Greece has been remembered as one of Mussolini’s wartime disasters. The campaign was launched in driving rain without any reasonable cover for the Italian troops. The weather and rugged terrain played a significant factor in the ultimate failure of the Italian invasion. Rising rivers and roads deteriorating into nothing more than mud tracks meant that Italian movement was sluggish which in turn allowed the Greek soldiers to fall back to their prepared positions. The Italian Centauro tanks struggled on these mud tracks, often becoming stuck and resulting in their abandonment. Italian reinforcements were thrown into the action in unsystematic fashion and with little tactical nous. Because of this, the Greek strategy shifted from being purely defensive to offensive with Greece actually managing to gain ground and push the Italians further back into Albania. With every success of the Greeks in the Greco-Italian war, however, it became more and more apparent that Germany would have to deploy troops and intervene. The Nazis finally came to assist Italy in April 1941 and with this the occupation of Greece had commenced. As a side note it is also worth noting that the subsequent retreat of the Italian forces back into Albania is thought by many to be the first Allied victory over the Axis nations.

How important was Greece in WW2 to allied victory?

The significance of Greece’s courageous resistance to fascist Italy is somewhat debated. Some think that it contributed greatly to the failure of the Nazi invasion of the Soviet Union. The theory being that it forced Germany into action when it should have been commencing ‘Operation Barbarossa’ the invasion of the Soviet Union. Due to the situation in Greece/Albania, the Nazis had to delay Operation Barbarossa by as much as six weeks. This gave the would-be ill prepared Russians some much needed additional time to prepare for the German invasion. Importantly, it also meant that the German assault was delayed into the onset of what was a freakishly wet and harsh Russian winter where freezing temperature would grind German progress to a halt and sheeting rain would, like in on the mountainous Greek border, turn the roads to nothing more than mud tracks. Hitler himself would later place the blame of his failed invasion of Russia firmly on the shoulders of Mussolini and his failed invasion of Greece[2][2]. It is difficult to say what significance a successful invasion and conquered Moscow would have had but the ramifications could have been huge and it is plausible that the Greeks played a key role in the Nazi’s failure.

The delaying and subsequent failure of Operation Barbarossa is not the only line of thought when thinking of the Greece in WW2 as unsung heroes The total occupation of Greece was complete when the Battle of Crete was won by the Axis Powers. This was the first mainly airborne invasion in history and the first time the Fallschirmjäger (German paratroopers) were deployed en-masse by Hitler… It would also be the last. This is due to the Greek resistance inflicting heavy casualties to the Nazi paratroopers and from then on Hitler would only deploy the Fallschirmjäger as ground troops[3]. Interestingly, the Allied powers were impressed with what they saw and could see the potential in airborne assaults and later adopted them in their own fighting.

As alluded to above, the notion and significance of Greece delaying Operation Barbarossa has been questioned. One of those doubters is Richard Evans. In his book The Third Reich at War he puts forward the case that the particularly bad weather in Russia at the time would not have allowed the Germans to launch their invasion significantly earlier anyway[4]. When discussing the delaying of Barbarossa some historians and commenters like to draw attention to the rebellion in Yugoslavia and argue that it was this that delayed Hitler’s plans more significantly than the Battle of Greece.

Even if Hitler had captured Moscow, would it have been that significant? Napoleon managed to do it and it had little effect on his eventual outcome, after all. The same can be argued with the Nazis. If Hitler was successful and Moscow was occupied, the Russians could effectively retreat further back into Russia and fall back on their greater manpower and production once they had collected themselves, with Hitler’s army being ill prepared to hold onto Russia had they been successful.

Whether or not you buy into the notion that the Greeks played a significant role in delaying Operation Barbarossa, hopefully now you can agree that the role of Greece has been often overlooked and that their role in World War Two tells the tale of a valiant and courageous resistance against Italian and German Fascism. The Greco-Italian war was surely a headache for Hitler and would have certainly been a headache and disruption to their planned Soviet invasion and had the German paratroopers not suffered such heavy casualties during the Battle of Crete Hitler would have launched more airborne attacks – the Greeks effectively nipped that strategy in the bud. To finish, some praise for Greece in WW2:

“We will not say hereafter that the Greeks fight like heroes, but heroes fight like Greeks!” Winston Churchill, 24 April 1941.

“If the Russian people managed to raise resistance at the doors of Moscow, to halt and reverse the German torrent, they owe it to the Greek people who delayed the German divisions during the time they could bring us to our knees.” Marshal Georgy Zhukov’s memoirs.

[4] Evans, R: ‘The Third Reich at War: How the Nazis Led Germany from Conquest to Disaster’ Penguin, 2009